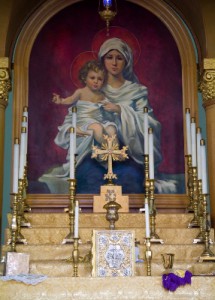 THE ARMENIAN ORTHODOX CHURCH
The Name of the Church

The Armenian Church, or the Church of Armenia, is also called Apostolic and Orthodox, the latter being the commonly used epithet in the Middle East.

The Church of Armenia traces its origins to Thaddeus and Bartholomew, two of the twelve apostles, who are referred to as the first enlighteners of Armenia to distinguish them from the second enlightener, St. Gregory (d.325). According to tradition, the two apostles were put to death in Armenia, St. Thaddeus in the year 66 and St. Bartholomew in 68.

Because of this apostolic evangelization, Christianity took root in Armenia in the period before Armenians could record their history in their own language, since the Armenian alphabet had not yet been devised. History records religious persecutions by at least three kings of Armenia during the years 100, 238, and 280. A victim of the persecution that began in the year 280 was St. Gregory, called the enlightener or illuminator? of Armenia. Gregory, of the noble Parthev or Pahlavooni family, had been educated at Caesarea in Cappadocia. He entered the service of King Tiridates of Armenia, who inflicted much persecution and suffering upon him. But Gregory succeeded in converting Tiridates, who in turn helped St. Gregory convert the whole country to Christianity. Ordained a bishop in Caesarea soon after the conversion of King Tiridates. Gregory built, with the support of the King, the first Christian cathedral at Vagharshapat in 303, near Mount Ararat, then the capital of Armenia. He was directed to do this by our Lord in a vision. In memory of this, the cathedral is known as Holy Etchmiadzin, that is, the place where the Only-begotten Descended.? Holy Etchmiadzin is still the official seat of the supreme head of the Armenian Orthodox Church.

In 325, the Armenian Church participated in the First Ecumenical Council at Nicea, with St. Aristakes, the younger son of St. Gregory the Enlightener representing his ailing father.

The thirty-six characters of the Armenian alphabet were devised by the monk St. Mesrob in 406. The translation of the Bible was accomplished within thirty years, and the preparation of the liturgical books and translations of patristic works were undertaken by pupils of St. Mesrob and St. Sahak (Catholicos, 387-436).

In defense of the Christian faith, Armenia waged war in 451 against militarily superior Zoroastrian Persia. Outnumbered, Armenian troops under the command of St. Vartan Mamigonian lost the battle, but the war dragged on until 485, when Persia ended its campaign to force Armenians back to Zoroastrianism.

In 506, a synod of Armenian, Georgian, and Caspio-Albanian bishops assembled at Dvin, which had been the seat of the Armenian Catholicos since 485. It proclaimed the profession of faith of the Third Ecumenical Council of Ephesus (431) and rejected Nestorianism and the acts of the Council of Chalcedon (451).

The seat of the Armenian Catholicos remained at Dvin, the original residence of the Bagratid Kings, until 927 when the city was sacked by invading Arabs. First the island of Aghtamar in Lake Van, and then the fortified city of Ani, became the seat of the Catholicos for over a century, until Ani capitulated to the attacking Greeks in 1045. With the ensuing migrations of large umbers of Armenians westward, the seat of the Catholicos was established in the castle of Romkla on the Euphrates River until 1292. During the Cilician Armenian Kingdom, the Catholicate was transferred to the capital Sis. It remained there until the return of the seat to Holy Etchmiadzin in 441.

Attempts at reunion, first with the Greek Church, then with the Latin Church, were initiated by Catholicos St. Nersess the Gracious in the twelfth century. He proposed a meeting of Armenian bishops and archimandrites to consider reunion with the Byzantine Church, but before responses could reach him, St. Nersess died in 1173 at the age of seventy-one.

The Armenian Patriarchate of Turkey was created by the Ottoman rulers in 1461, soon after the conquest of Constantinople. In the nineteenth century, lay leaders in the Armenian community of the capital (some of them educated in France) succeeded in drawing up an Armenian statute for the general administration of the Patriarchate. The Ottoman government gave its reluctant sanction to the proposed procedure in 1863. The statute was annulled by the Turkish secular government in the 1920s.

Following the liberation of Yerevan and Etchmiadzin from Persian rule by the Russians in 1828, the Czarist government enacted in 1836 a regulation (Polozhenie) that formalized relations with the Catholicate of Holy Etchmiadzin.

The deportations and genocide carried out by the Turkish government against the Christian population in the provinces during World War I dealt a severe blow to the Armenian Church. Of the 5,000 clergymen living in 1915, only 400 had survived by 1923.

With the sovietization of the tiny Armenian republic where Holy Etchmiadzin was located, the Polozhenie statute was abrogated.

Following the decimation and deportation of the Armenian population of Cilicia during 1915-1920, the patriarchal see at Sis was confiscated by the Turkish authorities. In 1929, with the help of the Armenian Patriarchate of Jerusalem, Catholicos Sahak II of Cilicia eventually established his seat at Antelias, north of Beirut, Lebanon, under the French mandate.

The Armenian Church became a member of the World Council of Churches in 1963.

His Holiness Vasken, Catholicos of All Armenians, visited His Holiness Pope Paul VI at the Vatican in 1970.

Following the breakup of the Soviet Union and the proclamation of the independence of the Republic of Armenia (September 1991), the Mother See of Holy Etchmiadzin has been facing the awesome challenge of redefining the role and mission of the Armenian Church within the territories of the former Soviet Union. Freedom of worship having now been guaranteed for citizens of Armenia, the hierarchy of the Armenian Church is concerned about the need to prepare large cadres of properly trained clergy, to organize religious education for all ages of worships, to initiate and encourage charitable and social service activities, to promote fund raising for the restoration of hundreds of ruined or closed churches and monasteries and for the construction of new cathedrals and parish churches, and to eventually undo the damage caused by proselytizing foreign missionaries.

In 1999, His Holiness Karekin II was elected and consecrated Supreme Patriarch and Catholicos of All Armenians at Holy Etchmiadzin.